It was gathered that the Late Neji was overpowered, raped to death by unknown assailants, who invaded her home on Sunday night, August 5, after Sunday Service at Assemblies Of God Church Obudu Road Ikom where she is assisting Rev.Elias Apieson.

Rev Solomon Ajuk, a Presbyter in the Ikom District of Assemblies Of God Nigeria, who confirmed the Development to PUO Metro Reports correspondent, said:

”We only discovered that since Sunday we’ve not seen her. On getting to her House we perceived an offensive Odour with her door still locked. We contacted the police who came and we forced the door open only to see her lying between the parlor and her room with a pool of blood on her bed””Her forehead had a wound where she was hit. A wrapper was on her neck, her pant was carelessly thrown suggesting that she was raped and killed. That’s the police preliminary investigation” He said.

The house of the late Pastor was scattered suggesting there was a struggle before she was over powered, raped and killed.

The Divisional Police Officer of Ikom Police Station Mr Aluyi abdulazez was on ground with his men and team of medical doctors who carried out autopsy confirming she was raped to death. 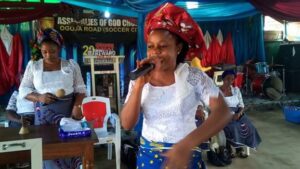