Police have arrested a 25-year-old bricklayer for sexually assaulting a three-year-old pupil in Lagos.

The suspect, Yinusa Olowu allegedly raped the schoolgirl in her non-registered primary school, Smart Kids Say School in Bariga area of the state.

Yinusa was said to have been arrested after the child was examined at Mirabel Centre and was confirmed defiled.

According to a police report, the suspct had gone to visit his friend, who owned Smart Kids Say School, Sodiq Showumi, when he carried out the action right in the school premise.

Sodiq was arrested and accused of the crime being the primary guardian of the seven children in his school.

However, upon interrogation, he recalled that Yinusa had come visiting. He said he had left the children in his care while he went to pour away the pupils’ urine.

“I suspect Yinusa. Two years ago, he had a case of defilement within the community.” he said.

Yinusa, an indigene of Ijebu Ode in Ogun state, admitted having committed the crime during interrogation. He further revealed that he defiled the pupil with his finger.

He was transferred to the gender unit of the State Police Command for further investigation and prosecution. 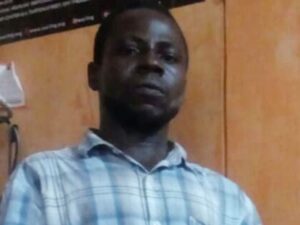